Book 2 in the Secret Six Series

Meet the second member of the elite Secret Six team!  Strong, gritty and oh-so-sexy, Grant Halverson is a pilot and as devoted to his mission as his superior officer was in The Spyglass Project.

It’s 1926, and Edie Kahn is a struggling film star and daughter of a master brewer.  When she returns to Chicago, the city’s most powerful crime lord orders her kidnapped in a ruthless blackmail scheme against her father.

Grant must bring her home again.  He must deceive her to keep her safe, but keeping her safe isn’t easy when they’re holed up with heavily-armed gangsters and no way back to his aeroplane.  Only his lies help keep them alive.  Only his work undercover will give him the answers the Secret Six need to keep their mission alive.

But only the truth will convince Edie to trust him.  Grant can’t give her what she craves, but there’s something convincing in his touch and kisses.  She learns she must follow her heart as together, they escape the perils in one country for the safety in another, and discover an unexpected love for each other along the way.

The Brewer’s Daughter is available on your favorite platform 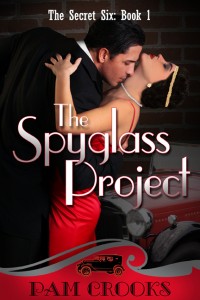 Book 1 in the Secret Six Series

Haunted by his brother’s murder by the German enemy, Major Michael Malone is driven to find answers and satisfy the revenge burning inside him.  Eight years later, on the night his best friend is killed, evidence suggests the two murders are connected.

Gianna Mangiameli’s comfortable world is shattered when she’s blackmailed by a Mafia hitman during a cosmetic store robbery.   Desperate to protect her family against the gangster’s threats, she must keep secret what she’s witnessed–and find answers of her own.

Michael and Gianna are thrown into Chicago’s criminal underworld and fight a dangerous new war on America’s soil.  In their need to keep each other safe, they learn they must be prepared to pay the ultimate price–with their lives and their love.

**”The Spyglass Project by Pam Crooks is an undiscovered treasure . . . a well-crafted story!” — NetGalley reviewer

The Spyglass Project is available on your favorite platform 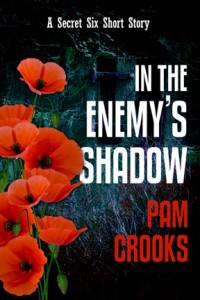 In the Enemy’s Shadow

Hedda Klein, working as a spy for the United States government under the code name of Agent Delilah, witnesses the murder of a troubled friend and comrade.  She must flee to save her own life, only to encounter revenge and betrayal from a woman she trusts most.

The Spyglass Project is the first book of the Secret Six series set in the Prohibition era of 1920s Chicago, featuring Major Michael Malone who goes underground to expose a crime lord funding the rise of Adolf Hitler.  The book opens with a Prologue set eight years earlier in a prisoner-of-war camp in Wittenberg, Germany, during World War 1.

In the Enemy’s Shadow begins where the Prologue in The Spyglass Project ends and is a behind-the-scenes look at the life of Agent Delilah.

Available in your favorite format for 99¢

To receive announcements of my latest releases, just add your email address and click 'Join Now'.

Please Note: This is a double opt-in process. You will receive a confirmation email to confirm your request to join. Simply reply to the email--it's fast and easy! Safe, too.

If you don't receive your confirmation email, try checking your spam folder.

I'll never share your information or sell your email address to anyone. You will only receive my newsletter a few times a year.